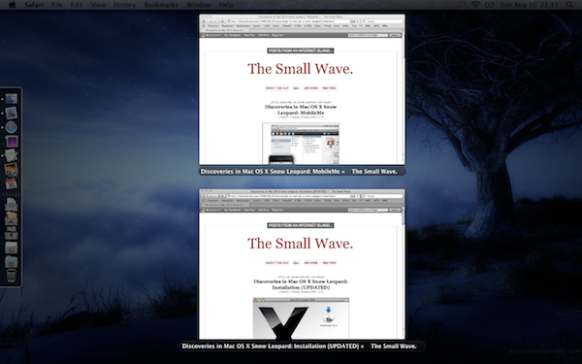 If you’re wondering why I’m writing about these items together, it’s because Exposé and Spaces are both related to window management (with Spaces at a higher level), and in Snow Leopard they built Exposé into the Dock so it comes along for the ride.

Spaces hasn’t really changed in Snow Leopard. Where the real change comes is Exposé itself, which is slicker than before, and some Dock changes to invoke it.

The screenshots below make more sense if you understand how I organize my apps/windows. Put simply, I use six spaces as an integral part of my work. Each space generally only has 1-3 apps in it, so clutter in any one space is minimal.

Let’s say I’m in space #5 and invoke Exposé. I use a gesture (upper right screen corner) to invoke the “All Windows” option, and see this: 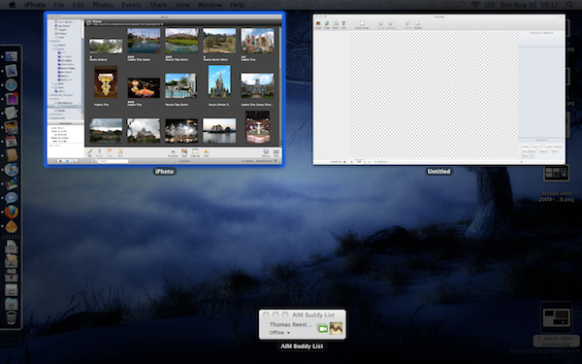 This shows me “all windows” for the space I’m in; you can see I’ve got three windows in this space.

It should be immediately apparent what’s different about Exposé in Snow Leopard. Instead of lining up willy nilly, the windows are lined to a grid. Further, instead of being unlabeled until you move the mouse over them, they have permanent labels. Finally, there’s a dark blue border around the “selected” window under the mouse (in this case, iPhoto). Aside from clicking the selected window to switch to it, there’s a new feature you can perform that we’ll get to in a minute.

Now let’s say I go back to space #5, and instead of invoking Exposé I invoke Spaces (gesture to the lower-left corner). I’ll see this: 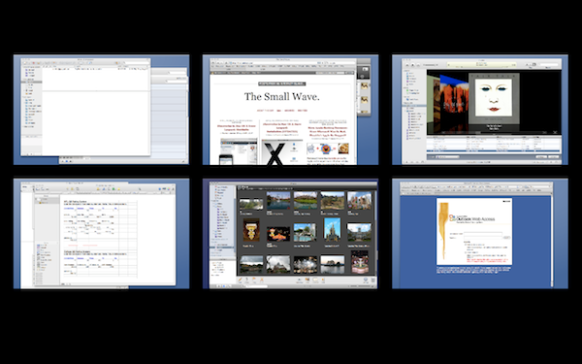 I’ve got a lot running for the purposes of this article (yet at this point it’s not all displayed). Notice that space #5 has a darker background than the others. That’s because it’s the currently “selected” space (i.e. under the mouse).

Exposé and Spaces: Together

Go back to the spaces picture above and imagine if I invoked Exposé from there. In other words, if I quickly moused to the lower-left and then upper-right corners (a natural movement since I’m right handed). I get this: 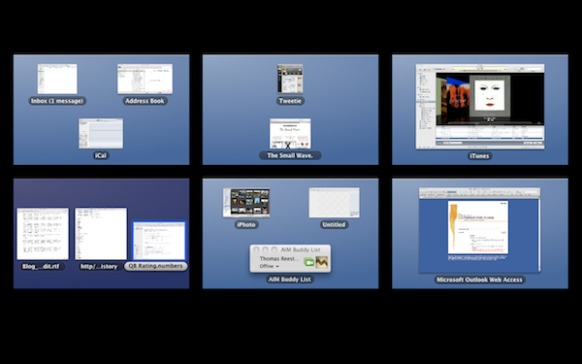 Now I get a picture of all opened windows on the Mac. Notice the mouse is over a window in space #4. The space has the darker background, and there’s a dark blue border around the selected window. A cool new feature in Exposé is that the selected window can be previewed for a closer look. Just hit the space bar to see this: 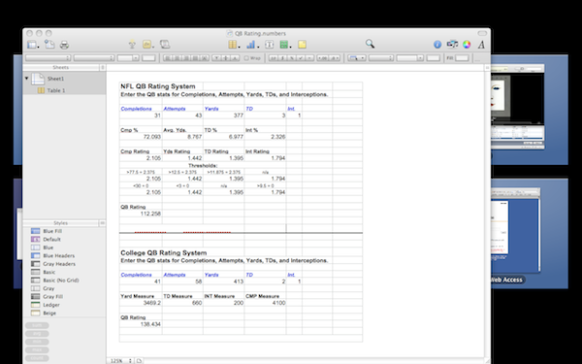 This is really nice when using Spaces and Exposé together because the displayed windows can get small– especially on my 13” MacBook. Sometimes the window title will be enough, but with similar titles the preview feature is a great way to ensure you’ve found the window you want. Just click the preview to move to that window.

(Windows 7 provides previews, too, but if you click it the whole thing disappears. Instead, you must click the small tab from which you generated the preview. Not a very wise implementation.)

Exposé’s additional polish and window previews are great, but there’s even more, and here’s where the Dock gets involved. Let’s say I’ve done some work in the Finder, and then from any space or application I just click and hold on the Finder icon in the Dock. I see this: 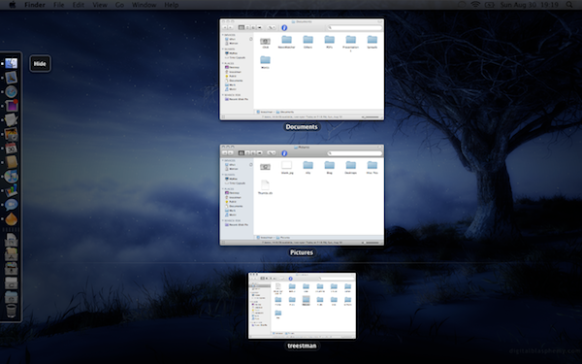 Three windows displayed, and in a similar style as we saw before. But one of them is drawn below a fine white line. What’s this?

Well, there’s a new preference for the Dock that allows windows to minimize to the app’s icon instead of a separate slot in the Dock. If you choose to use this option (I love it), minimized windows display in Exposé below a line on the screen.

Once Exposé is invoked you do not need to continue holding the mouse button down. This allows for some other great features. For example, assume I’m still at the screenshot above, and I click on the TextEdit icon in the Dock. I get this: 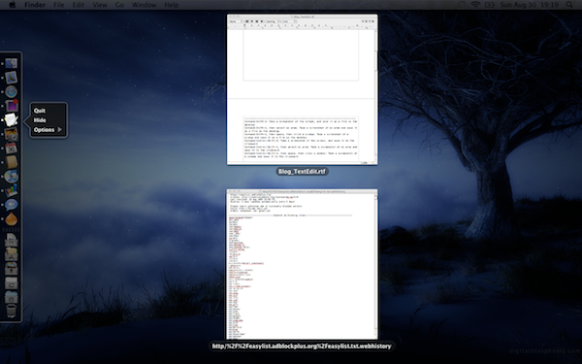 So I can quickly switch Exposé from one app to another. In fact, I can cycle Exposé through every open app by repeatedly pressing the Tab key. Sweet.

Whether alone or with Spaces, and no matter how you invoke it (gesture, the Dock, keyboard, or mouse), the bottom line is you click an Exposé window (or its preview) and you’re there.

It’s Too Much! My Head’s Gonna Explode!

Well, yes, if you tried to use every method you’re head might explode. But the way you work will lend itself to certain methods that make the most sense for you.

Personally, I think Apple added the Dock access so more people would discover Exposé. The Dock makes invoking it more accessible. And by making the windows line up neater, with labels, usability is enhanced no matter how you invoke it.

As for me, I’m a Spaces guy, too. The lower-left and/or upper-right corner gesture as needed is easy and natural. I can quickly have a space’s — or all — windows right in front of me. Yet as I’m working I rarely have more than a couple apps’ “clutter” to deal with at once.

I don’t think I’ll use the Dock for Exposé very often, I love using the gestures. But the neater grid, labels, and previews are something I’m already taking advantage of.